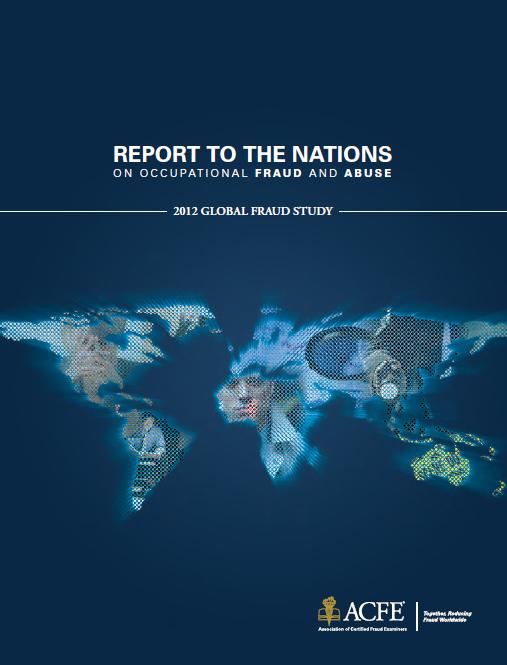 ___________________
• Survey participants estimated that the typical organization loses 5% of its revenues to fraud each year. Applied to the 2011 Gross World Product, this figure translates to a potential projected annual fraud loss of more than $3.5 trillion• The median loss caused by the occupational fraud cases in our study was $140,000. More than one-fifth of these cases caused losses of at least $1 million.
• The frauds reported to us lasted a median of 18 months before being detected.
• As in our previous studies, asset misappropriation schemes were by far the most common type of occupational fraud, comprising 87% of the cases reported to us; they were also the least costly form of fraud, with a median loss of $120,000. Financial statement fraud schemes made up just 8% of the cases in our study, but caused the greatest median loss at $1 million. Corruption schemes fell in the middle, occurring in just over one-third of reported cases and causing a median loss of $250,000.
• Occupational fraud is more likely to be detected by a tip than by any other method. The majority of tips reporting fraud come from employees of the victim organization.
• Corruption and billing schemes pose the greatest risks to organizations throughout the world. For all geographic regions, these two scheme types comprised more than 50% of the frauds reported to us.
• Occupational fraud is a significant threat to small businesses. The smallest organizations in our study suffered the largest median losses. These organizations typically employ fewer anti-fraud controls than their larger counterparts, which increases their vulnerability to fraud.
• As in our prior research, the industries most commonly victimized in our current study were the banking and financial services, government and public administration, and manufacturing sectors.
• The presence of anti-fraud controls is notably correlated with significant decreases in the cost and duration of occupational fraud schemes. Victim organizations that had implemented any of 16 common anti-fraud controls experienced considerably lower losses and time-to-detection than organizations lacking these controls.
• Perpetrators with higher levels of authority tend to cause much larger losses. The median loss among frauds  committed by owner/executives was $573,000, the median loss caused by managers was $180,000 and the median loss caused by employees was $60,000.
• The longer a perpetrator has worked for an organization, the higher fraud losses tend to be. Perpetrators with more than ten years of experience at the victim organization caused a median loss of $229,000. By comparison, the median loss caused by perpetrators who committed fraud in their first year on the job was only $25,000.
• The vast majority (77%) of all frauds in our study were committed by individuals working in one of six departments: accounting, operations, sales, executive/upper management, customer service and purchasing. This distribution was very similar to what we found in our 2010 study.
• Most occupational fraudsters are first-time offenders with clean employment histories. Approximately 87% of occupational fraudsters had never been charged or convicted of a fraud related offense, and 84% had never been punished or terminated by an employer for fraud-related conduct.